I Got Two Wings 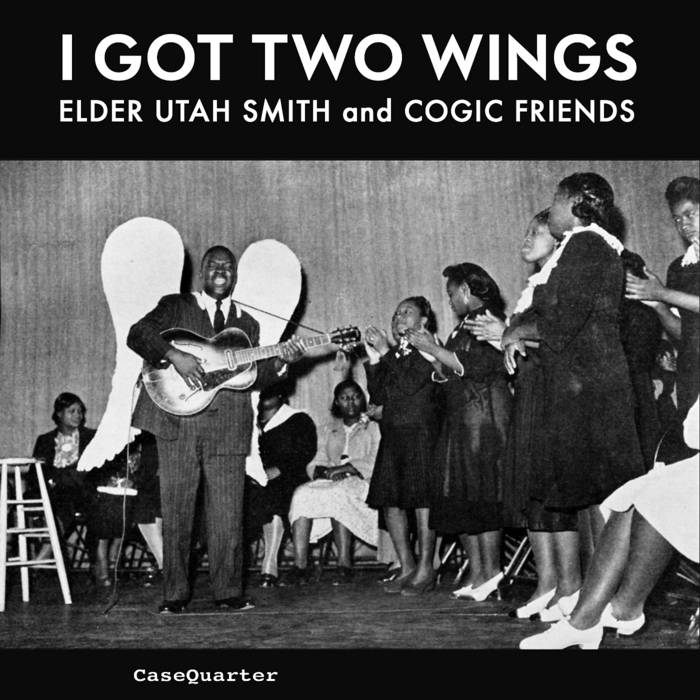 + contemporaneous
Church of God in Christ singers and players, as per above,
exact details besides main artist are unknown


Despite waxing three of the hottest electric guitar records of the pre Rock and Roll years, almost nothing had been known about the life of the sanctified electric guitar preacher Elder Utah Smith until the publication of "I GOT TWO WINGS: Incidents and Anecdotes of the Two-Winged Preacher and Electric Guitar Evangelist" in November 2008: www.aumfidelity.com/casequarter.html

African-American music scholar Lynn Abbott's years of research produced a remarkable biographical study finally shining a light onto the preaching, healing and guitar playing ministry of this path-breaking performer, one whose revivals and appearances were as well known and anticipated in his time as any other sacred or secular musician. I Got Two Wings elementally places Utah Smith within the Pentecostal-Holiness Church of God in Christ tradition along with such COGIC contemporaries as Sister Rosetta Tharpe, Elder Curry and the Rev. F.W. McGee. Filled with fascinating anecdotes and first hand remembrances and testimonies, I Got Two Wings also features many rare and unpublished photographs, and an 18-track CD produced by CaseQuarter’s Kevin Nutt.

The CD is the definitive collection of Elder Utah's recorded works and includes 5 previously unknown Utah Smith songs along with a stunning array of rare & relevant contemporaneous tracks by COGIC friends and associates, along with two rocking performances by Utah Smith's daughter, Sister Sarah James, with the Sanctified Six.

The book's author, Lynn Abbott, is a long-time devoted student of American vernacular music. He lives and works in New Orleans. He is also the co-author with Doug Seroff of "Out of Sight: The Rise of American Popular Music, 1889-1895" and "Ragged But Right: Black Traveling Shows, Coon Songs, And the Dark Pathway to Blues and Jazz", both from the University Press of Mississippi.

This remarkable book is now out of print. Perhaps a great response to this posting of the recordings which accompanied the book will prompt & allow the time/cost/nrg to facilitate a reprint of some kind, handclaps!


Update as these recordings are posted here:
Although Elder Utah Smith was a sanctified celebrity in his time, with folks traveling miles to see him perform, he was buried in an unmarked grave in Shreveport, LA, the city of his birth. Over 50 years later, in late 2018, local music historian Chris Brown and CaseQuarter's Kevin Nutt crowd-funded a grave marker for Smith's plot. Read more here: 20x49.shreveport-bossier.org/2018/11/29/music-fans-to-dedicate-a-grave-marker-for-reverend-utah-smith/


Advance praise printed on the book-sleeve:

“I vividly remember the first time I heard Reverend Utah Smith in 1965 on a 78 rpm record on the Two Wing Temple label.  God, what a sound!  Screaming vocals by Rev. Smith, heated responses by a chorus of young women, and manic, distorted electric guitar with the volume knob turned all the way up. Since that time I have longed to know more about this mysterious evangelist and pioneer of the electric guitar but have learned very little.  Now, after more than forty years of waiting, Smith's story is finally here, and we all can read this wonderful and extensive biography by Lynn Abbott, gleaned from press accounts and interviews of family members, friends, fellow musicians and members of the Church of God in Christ.  It turns out that Smith was a major player in the growth of America's largest predominantly black Pentecostal denomination. This is a remarkable story that opens up a world of music little known outside church circles.” –Dr. David Evans, The University of Memphis

“Long derided in some pulpits as a tool of the Devil, the electric guitar was nothing short of a sanctified soul-saving device in the clutches of evangelist Elder Utah Smith. He spent a lifetime conjuring ecstatic sounds in the service of Holy Ghost revivals across the nation, but Smith, buried in an unmarked grave in 1965, has largely been forgotten. So all praises to Lynn Abbott for I Got Two Wings, a work of meticulous research and devotion that weaves together eyewitness accounts, personal testimony and dusty documents from the historical record to resurrect the glorious and charismatic life of an unsung hero.” –Doug Schulkind, host of "Give the Drummer Some" on WFMU-FM (wfmu.org)


And from reviews on the Book+CD release:

"As easy as it might be to describe this as a book that happens to include a CD, the fact is, it's truly a collection of sounds so overwhelming in their intensity, significant in their historic importance, and infectious well beyond the limits of conventional vocabulary or physical expression that they demanded not liner notes but a tome expounding on the subject. Plus, Abbott's book is miracle of research and meticulously complete." –Bruce Miller, THE OLD-TIME HERALD

"A molten meld of evangelical ecstasy, wooly fills, and whiplash runs. The rafters will shake and your pulse will quicken: Hallelujah, crank the volume! A tremendous book fills in all the details with text, photographs, newspaper clippings, and personal interviews galore."
–Dennis Rozanski, THE BLUESRAG

"We’re interested now because Smith’s music still has power to transport you to another place, whether you do God or you don’t. The CD is revelatory. Although the basic ingredients never change, the six radically different versions of “Two Wings” find Smith keeping his ear to the outside world. On “Two Wings Flying Home”, cut under the alias of Brother Bill Louis in the early 1950s, Smith ponders the terrifying possibility of The Bomb, and the distinction between Smith’s electricity and the stately “I Have Good News To Bring” by Sister Rosetta Tharpe (also included on the CD) is equivalent to Pete Seeger’s old-worldly charms put against electric Dylan. Smith’s message has readied itself for a plugged-in world: Hendrix is just on the horizon." –Philip Clark, THE WIRE

"The electric riff was still a recent miracle when Elder Utah Smith, a superstar evangelist and guitarist from northwest Louisiana, first recorded his signature ascension song, “I Got Two Wings,” in 1944. He meant what he sang: Smith typically presided at services in giant homemade seraphim wings. But his musical gifts were very much of this earth: a pitted roar as big and deep as Howlin’ Wolf’s; an agile clawing attack on guitar, a rough mix of runaway Robert Johnson and sanctified Charlie Christian. Smith, who died in 1965, cut multiple versions of his hymn for different labels, each a proto–rock & roll train to glory, and they are all on the CD that comes with Lynn Abbott’s energetic biography" –David Fricke, ROLLING STONE

“Man alive, every year there's an old-timey collection or two that you just gotta get, and let me tell you this stellar package documenting the life and milieu of traveling evangelist for the Church of God in Christ Elder Utah Smith is just such an essential object. He didn't record much, but what he did is incredible and the first 45 seconds of this disc alone oughta knock you out, such imaginative shredding has rarely been heard! This is a spirited and transcendent collection that also features killer cuts from Arizona Dranes, Sister Rosetta Tharpe, Sister Sarah James, and others. –Michael Klausmann, OTHER MUSIC

The CaseQuarter label was established to document and make available gospel / sacred recordings of the Southern U.S., both contemporary & historical.

Four vital album works have been released to date, each of them feature captivating and singular electric guitar accompaniment. ... more

Bandcamp Daily  your guide to the world of Bandcamp